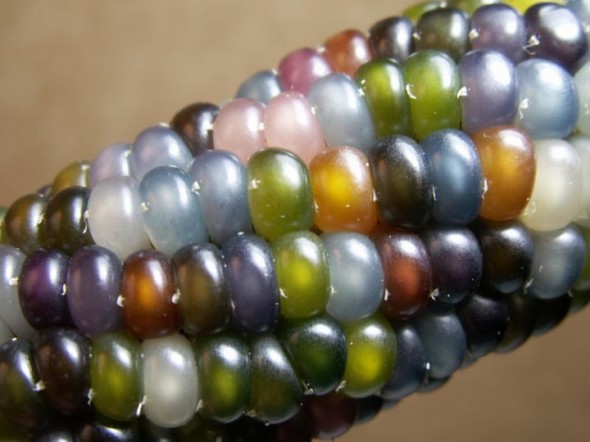 Can You Believe Your Eyes?

When you consider corn, what comes to mind? A common yellow vegetable? A healthy snack? Or a crop grown for livestock feed and fuel? How about a beautiful piece of art? That’s what your impression may be the first time you see glass gem corn, a surprising variety which appears to be a cob full of gemstones of every color. This is no trick of Photoshop, but the most beautiful, and surprising, corn variety in the world!

Prior to 2011, glass gem corn was a variety that was undiscovered to modern agriculture, and it may have remained lost if not for a fortuitous twist of fate. A seedsman named Greg Schoen received corn seeds from his “corn teacher” Carl Barnes, who had spent years studying and working with corn varieties. Carl, a part-Cherokee man is in his mid 80s from Oklahoma, studied corn varieties extensively and reintroduced many ancient and traditional varieties that had been lost to Native Tribes.

Though Greg and his friend Jose Lucero get the credit for the first modern, large-scale cultivation of the variety, it remained part of Greg’s private seed collection which he shared periodically with others with the intention of keeping the variety alive. It may have been introduced widely to the world had Greg not decided to move in 2010. In order to store and protect his precious seed collection, Greg entrusted several different samples of corn seed with Seeds Trust, a 25-year-old family owned heirloom and open-pollinated seed company, including the glass gem corn seeds.

In 2011, Bill McDorman, president of Seeds Trust, grew some of the corn that Greg had entrusted to them, with amazing results! Photos of the beautiful corn were posted on the internet, and they spread like wildfire. Unbeknownst to Bill, who had not known foreseen how gorgeous the crop would be and had not grown a large enough supply for sale, a public clamoring for the seeds was about to ensue.

Glass gem is non-GMO heirloom rainbow corn variety that actually comes in many colors. It is best used for cornmeal, as opposed to slathering with butter at the dinner table. It is also a marginally decent popping corn. It is a long season variety, requiring 110 days to reach maturity. The height of the stalks is roughly six feet.

Greg Schoen recommends planting at least 300 seeds at a time to maintain the large diversity of colors in your crop’s gene pool. Currently, only 50 seeds at a time are sold to customers on the Natives Seeds waiting list, so purchasing more seed from other sources may be beneficial.

Purchase seed corn on eBay, or on the Native Seeds/SEARCH website.  You can also buy seed on Amazon.

How do so many vibrant and diverse colors appear on a single ear of corn? The answer lies in an odd phenomenon of genetic inheritance that does not follow Mendel’s rules. Each kernel is actually a different corn plant (or the seed of one) with a unique mix of genes inherited from its parents. Diversity is increased further via transposons, or “jumping genes,” which are strands of DNA that move from place to place in the genome. When they land in a gene for pigment, the color of that cell is altered, producing kernels of a particular color that may be specked or streaked with a second color. The result is brilliant display of agricultural biodiversity and the beauty of nature.