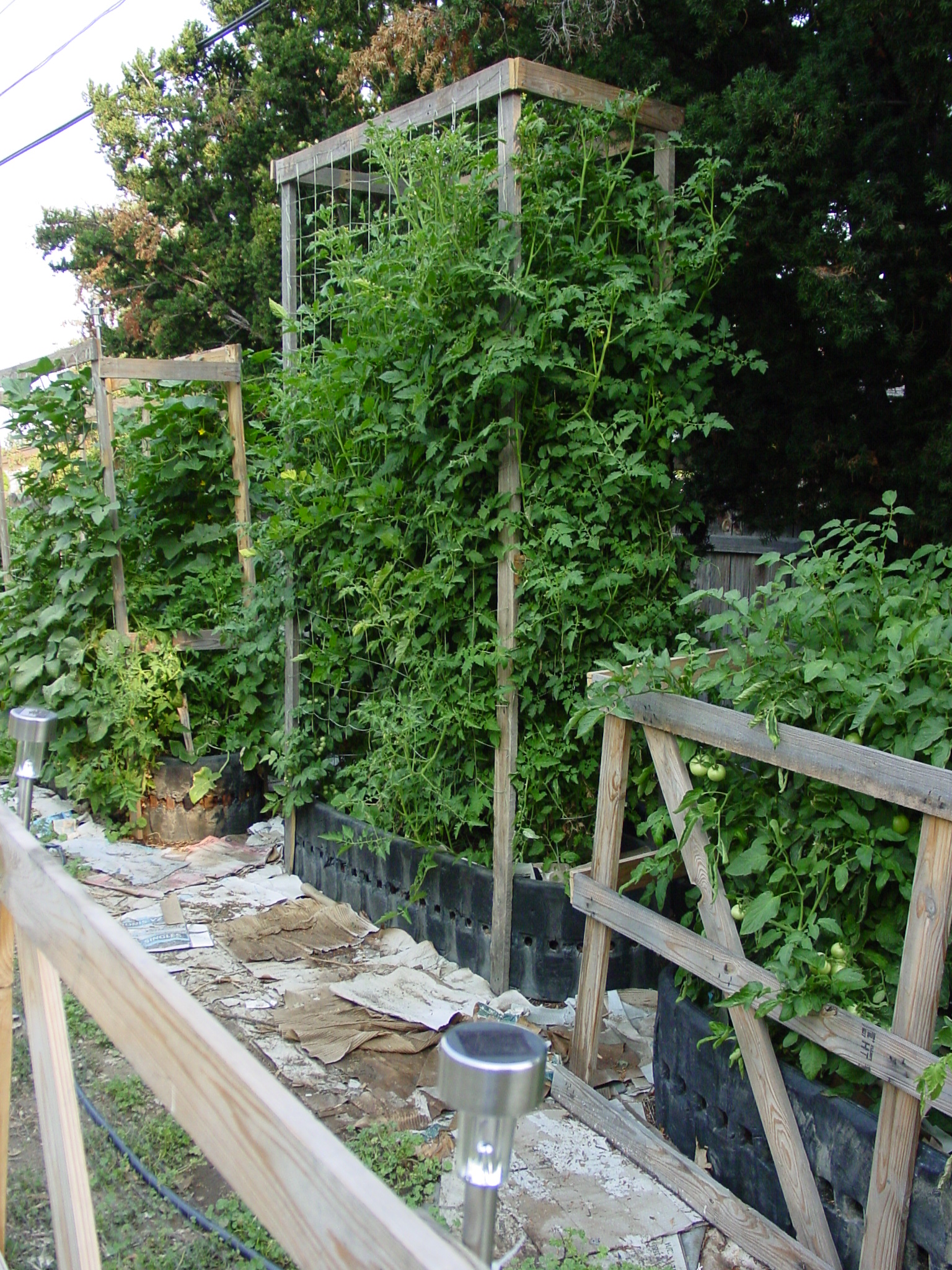 The internet is a wonderful tool for connecting with like-minded folks.  I recently asked a question online about Tattler canning lids, and received a wonderful reply from Heather Rodman.  Her response piqued my interest in her farm.  I discovered that Heather is a resourceful backyard permaculture farmer and blogger at The Real Leopardstripes. Her blog motto makes me smile, “Making Stuff, and Breaking Stuff, since 1971.”

Heather and her family live in the Northwestern region of the U.S., in a high desert area. Although the elevation is much greater than ours in Phoenix, the growing conditions sound so similar with low rainfall, heat, clay soils and caliche.  Read Heather’s story and how she started her backyard permaculture farm with used recycled materials to create water-retaining raised beds that overcame these common challenges.

This all started when I first moved to the Intermountain West, and I discovered the challenges of high mountain desert gardening. It’s not at all like the Pacific Northwest- the sun shines most of the time, it’s dry, and it can be HOT. Also, we have a type of soil known as caliche. When wet, it acts like heavy clay. When dry, it’s just awful! And it takes a while for it to absorb water, so if you’re starting with a dried out patch of dirt, well, you’re going to need patience- it’ll take a while for it to percolate. If you add sand to it, to try to lighten it, it becomes like concrete.

At my previous home, I tried digging down a few feet in a couple of flower beds, and replacing the soil with good humus. A year later, the caliche had literally moved in, and “eaten” the good soil. If anything, it was actually worse than it had been before- I now had concrete with more nutrients. The pigweed and thistles were in love. And I was in despair. 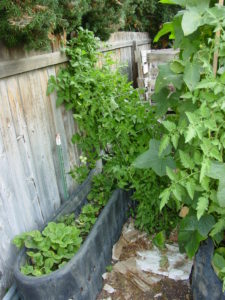 Fast-forward a few years- different house, but the same soil. When the economy collapsed, I took a job in a tractor dealership, as a warranty administrator. (I had formerly been a chef, but with the birth of my two children, I’d given that up.) My boss was lamenting one day about the disposal cost, for skidsteer tracks, so I asked him, what do they do with them? He said, well, the landfill will take them, but it costs a fortune.

I thought about it, and said, wanna send a few to my house? He asked me why, so I told him, I want raised beds. He laughed at me, told me I was crazy, but had our trucker forklift a bunch onto the flatbed, and had them delivered to my place. My husband almost ruptured a couple of discs in his back, arranging them, but boy, do they work a treat! It actually cost the company less to deliver those treads on the big rig, than it would’ve to dispose of them.

Backyard Permaculture Gets Its Start at Heather’s Farm

We currently have 15 tread-beds in operation, located on the north edge of the property, in a pretty compact space. They are sheltered somewhat by a 6′ wooden fence, and a row of yew trees, to the north, and exposed to the sun southward. Using the treads, we’re able to start plants sooner than most of our neighbors, due to their heat retention- this year, we even had, and are harvesting from, volunteer tomato plants, something that no one around here’s ever seen before! My husband built the fences and trellis frames shown in the pictures, made from pallet wood gleaned from the tractor shop.

Compost:  A Staple of Backyard Permaculture 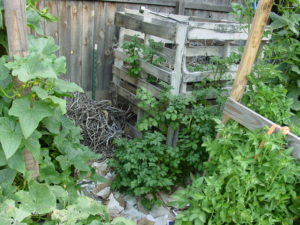 The compost bin (which decided to grow volunteer potatoes, out of the blue this past spring) is likewise made from old pallets. I also use old steel tractor and truck hubs as planters, but only in the shade- they heat to baking temperatures in the summer sun. Growing in containers and raised beds like these cuts water use drastically, and it’s surprising what can work. One of my better individual planters is an old rope-handled plastic utility tub- when the bottom cracked out, we thought, why not? In went the compost, and the plants! It’s been great, for peppers and tomatoes.

Backyard Permaculture Takes Time, but Doesn’t Have to Cost Much 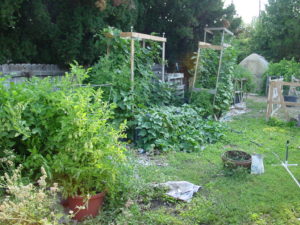 This didn’t come together overnight. The first two years, we were in a very bad way financially, so every compostable kitchen scrap, dead weed, eggshell, or raked leaf went into the treads- we couldn’t afford, yet, to get decent soil to fill them. We broke some of the rules for composting: basically just dumping EVERYTHING in, not stirring it up, and letting the elements have at it.

At the same time, we stopped using weed killers, artificial fertilizers, and all other chemicals in the yard, as a whole. We gave up on the so-called “lawn” being perfect, or even watering regularly. The soil was dead, from decades of chemical lawn stuff and pesticides. It’ll sound crazy, but I almost cried with joy, the first time I found earthworms in the treads. From there, things began to slowly come back to life. 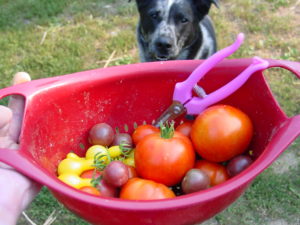 Last year was the first time that we could afford to fill the treads properly, so I laid down cardboard all over, between the treads, to block any thistles or buffalo burrs that might try to spring up. We shoveled finished organic compost into all of the treads, and planted our first crops. We chose tomatoes, peppers, pumpkins, and several herbs. Then we bought good, tall tomato cages, and devoted all of our outdoor watering budget to just the tread-beds. And were STUNNED when not only did the tomatoes grow up, they grew over, and well beyond, the treads. The tomato cages collapsed, under the weight!

Canning and Preserving the Harvest

At the end of the season, I discovered that several vines were close to 20′ long- and they were very, very productive. I canned serranos and jalapenos, homemade salsa, and dried large hot peppers by hanging strings of them in every window. But, after canning tomato sauce well into the winter, we decided that next run, we’d try some other crops. I finally ran out of box-ripened tomatoes, the last of the crop, in the middle of December. We’ll have cases of tomato sauce for at least another couple of years, from that first-year experiment! Many, many neighbors and friends enjoyed big boxes of fresh heirloom tomatoes and peppers from that first attempt, though. 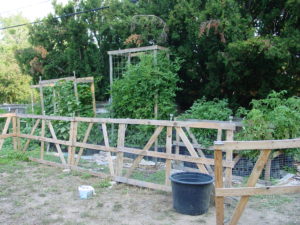 This year, we’ve grown pickling cucumbers, the aforementioned volunteer tomatoes, carrots, and green beans. We’ve kept a treadfull of strawberries, too. We’re learned that if you want to grow something more delicate, like a carrot or a string bean, it’s a good idea to grow it behind a tread-bed full of tall tomatoes, or cukes. We’ve had a few losses- something out there really loves dill, so much so that they ate the plants down to the roots.

Thankfully, we had several dozen baby tomato plants that we moved to those spots, so while we’re having to buy fresh dill to can our pickles this year, we at least have more tomatoes to console us, ha ha ha! But the cucumbers have turned out to be a variety that can be used small, for pickling, or let to grow larger, and used as slicing cukes- not at all bitter, and wonderfully crisp.

I’ve been canning a dozen or more jars of pickles every week, and delivering grocery sacks full of the larger ones to every neighbor, coworker, and even my hairdresser. It’s become a big, informal trading collective- we bring cukes and tomatoes, and are given all kinds of other produce and goods. The social benefits of growing on this scale can’t be overstated- everyone loves fresh, organic produce, especially when it’s given to them for free. We’re closer to our neighbors, emotionally, than we’ve ever been, and it’s been fun, sending the kids around to some of our more elderly neighbors’ homes with goody baskets. Some of them can’t garden as well as they used to anymore, so they’re especially happy to see the boys. What we can’t can or freeze makes its way to them that wants.

Our growing philosophy is basically, use what you have, alongside of “live and let live”, with a kind of benign neglect. For example, we don’t pull all of the weeds- some of them have turned out to be either much-loved by the pollinators, or to be herbs, like the white yarrow that’s popped up in the back. (We still don’t know where it came from!) This attitude has brought us more joy, and more serendipity, than with any other project we’ve ever worked on, as a family. It’s not the prettiest urban garden, perhaps, but it’s the most lively one in our neighborhood. The variety of pollinators, predatory insects, and surprise flowers and plants has made our growing season an everyday feast of miracles and delights.

We do not use pesticides, but we do manually remove squash bugs, and the occasional noxious weed. Most things, even sowbugs and slugs, we just leave where they are- they’re just letting us know that we’re watering a bit too much. Without a few aphids, you won’t have ladybugs. Without some grasshoppers and other leaf-munchers, the mantises have nothing to eat. Everything seems to be serving a purpose out there, even the occasional hornet. 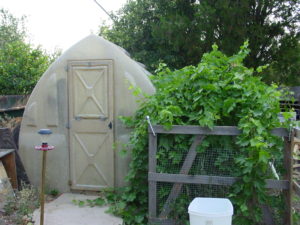 We’re going to be building a new composting bin, hopefully a three-stage setup, in order to better utilize our neighbors’ chicken coop leavings, along with our own yard and kitchen waste. We also hope to get the disused greenhouse at the back of the property into order again- it needs work. We’re restoring the grapevines there, and getting them to grow up off of the ground again.

We’re still doing a lot of guessing and experimenting, and our winters are full of online research and reading of organic gardening books and magazines. My hope is that eventually, we’ll work out how to grow cooler-weather crops without having them bolt, and to build some cold frames, for cole crops. We’re also hoping to afford to install a gutter system on the house, and on the sheds that we plan to build, so that we can use rain barrels for more of our watering needs.

We’re not sure what we’ll be planting next year, but we’re firm believers in the intelligence of crop rotation, to reduce pests and diseases. Whatever it is, I’m sure it’ll be abundant! (And probably at least 3 times as much as we planned for, LOL!)