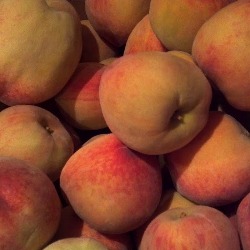 Peaches…fresh, sweet and delicious. They are my favorite fruit of the summer. There is nothing like the pleasure of biting into a ripe, juicy peach. I love to pick them at the orchard and bring home boxes of the gold and pink orbs. When the days are long and hot, and my kitchen is sticky and steamy from canning pie filling and marmalade, nothing sounds better than to cool off with some peach ice cream.

This homemade ice cream recipe will teach you to make divine Peach Cobbler Ice Cream, and will describe tips and tricks to make it easy and oh, so yummy! And if you don’t have an ice cream maker, the process takes a little bit longer in the freezer, but, believe me, it is worth the effort!

By the way, this recipe is versatile and can easily be modified to use other fruits. Or eliminate the mashed fruit and add chocolate chips, brownie chunks, or chopped candy bars. Enjoy experimenting!

The Easy Way to Peel Peaches

Ripe peaches are easy to peel and the skin will slip right off with no resistance if you blanch them first. Blanching is the process of dipping fruits or vegetables into boiling water for a short period of time to prepare them for preservation or to release the skin. Blanching is followed by soaking in an ice bath to stop the cooking process.

To blanch peaches for peeling, bring water to a full, rolling boil in a pot that is deep enough to completely immerse your peaches. They do not have to be blanched all at once, but can be separated into batches. Immerse peaches in the boiling water for 1-2 minutes. Remove peaches from the hot water and place them in a bowl filled with ice water. After they have cooled for a few minutes, split the skin with a knife. It should slide off easily.

Sprinkle the gelatin over the cold water in a microwave-safe container, and allow to stand for 1 minute. Microwave the mixture on high power for 20 seconds. Stir and set mixture aside until gelatin is completely dissolved.

Blanch and peel peaches. Remove the pits and slice them into small pieces. Place them in a bowl with 1 cup of the granulated sugar and the lemon juice. Mix well, and then mash the mixture with a potato masher.

In a large bowl, combine the milk, half-and-half, and the evaporated milk. Stir in the gelatin mixture.

Add the peach mixture, salt, extracts, cinnamon, brown sugar, and the remaining 1/2 cup granulated sugar to the milk mixture. Stir until the sugar is completely dissolved and cinnamon is fully incorporated.

Fill the bowl of your ice cream maker 1/2 to 2/3 full. The mixture will expand as it freezes, so do not overfill. Freeze according to your ice cream maker’s directions. The ice cream will be soft, but you can freeze it to a harder consistency by scooping it into a covered container and placing it in the freezer for a couple of hours.

If you do not have a machine to make homemade ice cream, you can use the “still freezing method”.

Prior to preparing your ice cream mixture, set your freezer temperature 0Â° (-18C), or “fast-freeze.” The freezer must be very cold to freeze ice cream properly.

Prepare your ice cream mixture and place it into a freezer safe container with a lid. Put it in the freezer in the coldest area, usually the back of the top shelf of an upright freezer. The coldest area of a chest freezer is generally on the compressor.

Repeat this process at 1 – 1 1/2 hour intervals once or twice more. After the final beating, allow the ice cream to freeze for 2-4 hours before serving.

Note that if you are making ice cream with large pieces of chocolate, nuts, or other chunky items, do not add them until the last beating.

Our ice cream maker is one of the most used small appliances in our kitchen. The Cuisinart model that we have requires the container to be frozen, which means that it has to hang out in the freezer for at least 6 hours prior to making ice cream. Since ice cream is often a spontaneous event, I have two containers so that one is always freezing while the other is in use. Having two containers is also helpful for large batches that won’t fit in one single container.

And don’t forget to keep a reusable ice cream container handy to keep leftovers fresh in the freezer.