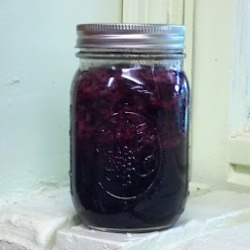 Preserves with a Surprise Ingredient

Making and canning homemade blueberry jam is so easy, and the result is delicious! Even if you are a fan of strawberry, raspberry, or some other berry jam, try this recipe. It’s fantastic, and the star anise gives it a yummy kick that will make your jam really stand out.

If you don’t like the flavor of star anise (it has a black licorice taste,) leave it out. The jam is perfectly wonderful without it.