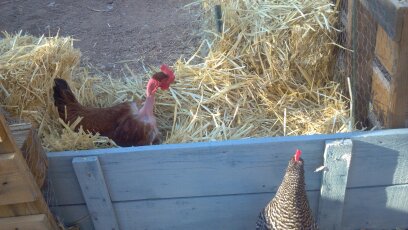 Urban farms are often challenged to find space for all of the elements that the farmer wants to add.  More can be done with an urban farm when it is designed carefully and when elements are combined.  The elements of the farm are the plants, animals, structures and systems that exist on the property.

Typical urban properties are characterized not by combined elements, but by segregated elements.  In urban areas, we are expected…

Following this model results in big expenditures of EFFORT and $$$.

There is a better way, and it’s all about relationships among the elements!  A simple example of combining farm elements is a compost-fed chicken system.  At The Micro Farm Project, I  noticed that food scraps in my compost pile attracted some bugs.  Chickens love to eat bugs, as well as food scraps.  They also love to dig and scratch, which resembled the work that I was doing to turn my compost piles. Perhaps I could throw my compost materials into the chicken run instead of the bin that I was currently using.

The more I thought about the idea, the better it seemed.  Chicken manure is a fantastic fertilizer once it is composted, so why not let the bird’s poop directly into the compost pile rather than adding it to the pile later?  And the chickens were great at spreading out bedding in their coop, so why not let them spread compost in the garden?

And so, I began collecting compostable materials in the chicken run behind the coop.  Kitchen scraps, landscape trimmings, weeds, garden clippings, and waste from the other animal pens were all thrown into the pile.  The chickens gleefully scratched through the pile, searching for tasty tidbits.  Each day when I refreshed the drinking buckets, I discarded the old water on the pile to keep it moist.  This renewed the chickens’ interest in the pile, which they energetically shredded into small pieces that decomposed rapidly into marvelous compost.  My feed bill decreased.  I have read that chickens who consume a varied diet produce healthier eggs, so I can only assume that our hens’ eggs were not only delicious, but more nutritious, too. 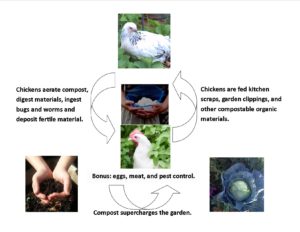 I began to compost more materials than I had previously when I was using a bin composting system.  The old system had not broken down waste from my animal pens quickly enough to avoid bad odors and flies, so I had resorted to throwing a lot of it away.  I had also avoided putting anything with meat or cheese in my compost bin for the same reasons.  But, with the new system, the chickens were able to break down both the pen waste and the meat scraps quickly enough that flies and odors disappeared.

Within a few short months, I had enough compost for my farm and plenty to share with a community garden.  I noticed a marked improvement in the quality of my soil, and consequently in the health and productivity of my plants.  Less and less fertilizer was required to grow more and more plants.  Higher yields equated to more food for my family and more scraps to feed the animals, which reduced my grocery and livestock feed budgets.  Increased organic matter improved the soil’s water holding capacity, and I joyfully discovered that my water bill plummeted.

The chickens seemed extremely happy and healthy.  I, too, was happy to be spending less time tending the compost pile and less money on food, water and fertilizer.  And the community garden was delighted to receive free compost.

I am now looking at ways to refine the system and close more loops. The biggest open loop is chicken feed that I purchase from a local feed store. Perhaps I could use the compost to cultivate native, drought tolerant grains to supplement their diet.  I am also considering dragging my chicken tractor into the alley and letting my hens dine on the weeds that grow there.  Additionally, I am sectioning off area of the farm and planting more edible trees so that the hens can free range longer each day and have more to eat in the yard.

Composting with Chickens on BackyardChickens.com

Compost in the Chicken Run on HenCam.com

What is Permaculture and How Can It Boost my Urban Farm?  on TheMicroFarmProject.com